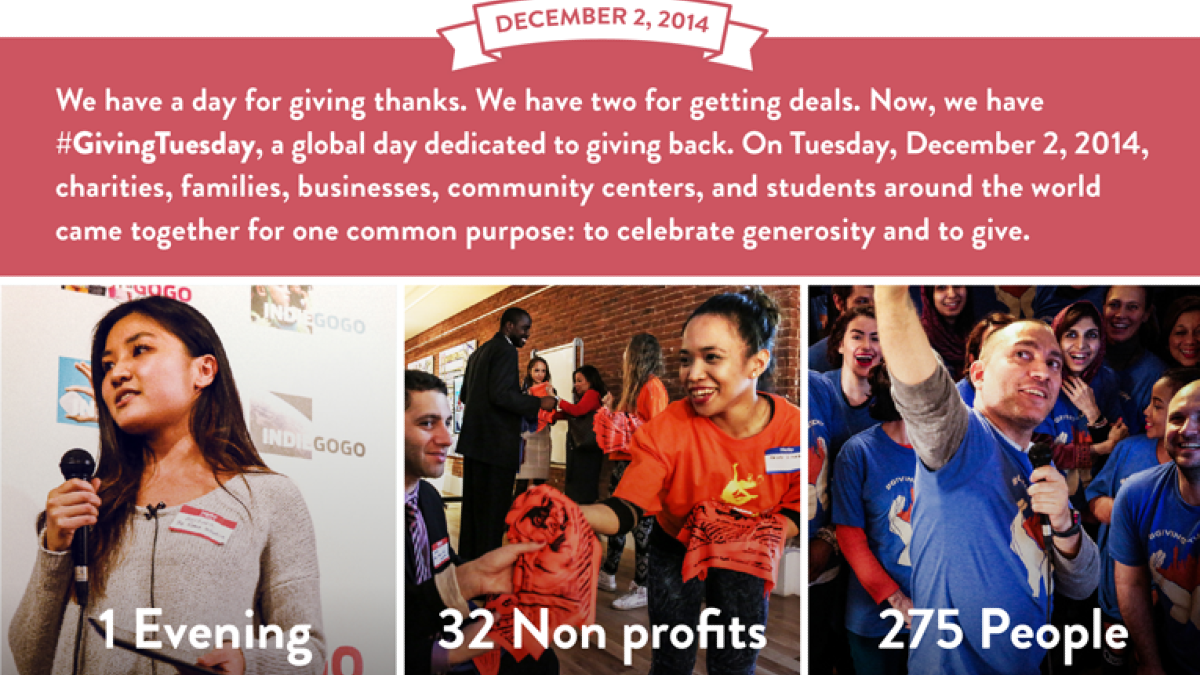 With over 275 registered attendees convening at the Impact Hub NYC, this unique event engaged nearly 200,000 supporters online, mainly via Twitter using the hashtags #NYC #IRL. Using Livestream, leaders from 32 charities shared their stories as they collectively fundraise over $1.2MM in IndieGogo campaigns through December 31.

Service Year nonprofit received the most votes on Givkwik and will receive $5,000 grant to support the launch of the first-ever corporate sponsored national service organization. Over 7,500 votes were cast on the Givkwik platform at giv.nyc.

December 8, 2014 - NEW YORK - After #GivingTuesday two (2) of the largest campaigns on IndieGogo involved in the NYC event were fully funded - Black Girls Code raised over $100,000 and Angel Flight West exceeded their $50,000 campaign goal. But the remaining thirty (30) organizations were actively seeking support and new donors.

Givkwik and Indiegogo, both tech platforms in the crowdfunding space, saw the value in an offline element to complement online fundraising by hosting a mission-driven event. With over 275 people in attendance and a Livestream in place, #GivingTuesday #NYC #IRL helped raise awareness for all thirty-two (32) nonprofit organizations to propel their year-end fundraising efforts. The localized effort reached nearly 200,000 Twitter accounts and delivered over 500 thousand media impressions.

Givkwik's CEO, Jason Rosado was elated saying, "We were very thrilled by what we were able to achieve and it would not have been possible without the enthusiasm of the non-profits and our partners. We maxed out on attendance on a cold, rainy night in NYC, which helped us confirm interest in an offline event on #GivingTuesday as engagement primarily lives online. We feel that we are really on to something, and are looking forward to our next event - very soon."

The format of the #GivingTuesdayNYC #InRealLife event was inspired by the Japanese style, PechaKucha, or the art of delivering a concise presentation. #InRealLife featured a series of ten (10) 2-minute pitches given by nonprofit leaders about their active IndieGogo campaigns. Attendees were asked to contribute and vote on which charity would receive a $5,000 grant.

Matt Ronen, Founder & CEO of Service Year, was pleased to learn he would receive the $5,000 grant as a result of rallying his support base. Ronen had this to say, "We are so grateful and humbled by the outpouring of support from our growing community of fans and future Service Year Fellows. They believe, as do we, that it's time for a reinvented career path that empowers top college graduates to launch a career and make an immediate social impact."

For more details on the participating charities, visit Givkwik at www.giv.nyc. The nonprofit pitches, as well as interviews with all the nonprofit organizations are available on Livestream at: http://new.livestream.com/accounts/11206238/GivingTuesday.

Givkwik is a tech company making it easy to get companies involved in philanthropy. Learn more at https://givkwik.com

Catchafire matches professionals with nonprofits based on their skills, cause interest and availability. Learn more at http://catchafire.org.

Radish Lab is a full-service interactive creative agency focused on people and projects changing the world. Learn more at http://radishlab.com.

Whole Whale is a digital agency that leverages data and technology to increase the impact of nonprofits. Learn more at http://wholewhale.com.

TVP Industries is an end to end solution for any brand merchandising needs. Learn more at http://tvpindustries.com.