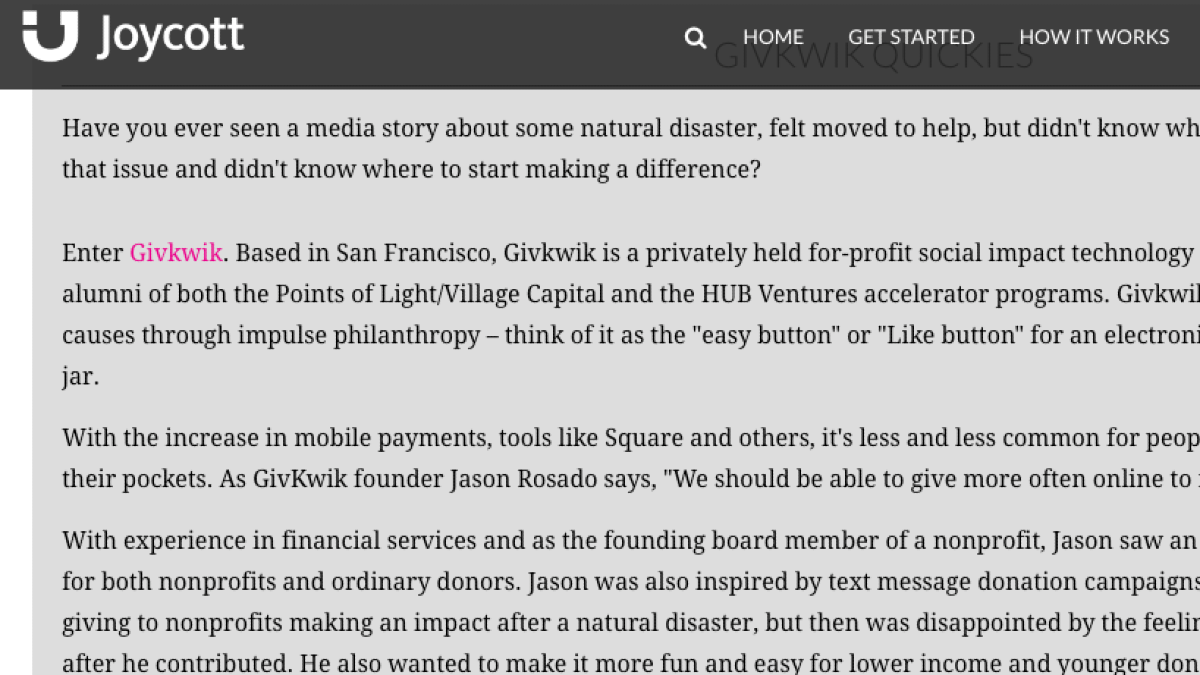 PRESS
Got spare change? San Francisco-based Givkwik will make it easier for you to get it to the right folks in need.

Have you ever seen a media story about some natural disaster, felt moved to help, but didn't know which nonprofits were making an impact on that issue and didn't know where to start making a difference?

Enter Givkwik. Based in San Francisco, Givkwik is a privately held for-profit social impact technology company whose founding team includes alumni of both the Points of Light/Village Capital and the HUB Ventures accelerator programs. Givkwik engages companies and consumers with causes through impulse philanthropy - think of it as the "easy button" or "Like button" for an electronic version of the "spare change" fundraising jar.

With the increase in mobile payments, tools like Square and others, it's less and less common for people to walk around with spare change in their pockets. As GivKwik founder Jason Rosado says, "We should be able to give more often online to more good causes and feel good doing it."

With experience in financial services and as the founding board member of a nonprofit, Jason saw an opportunity for a better giving experience for both nonprofits and ordinary donors. Jason was also inspired by text message donation campaigns that capitalized on the immediacy of giving to nonprofits making an impact after a natural disaster, but then was disappointed by the feeling of "being on a text-message mailing list" after he contributed. He also wanted to make it more fun and easy for lower income and younger donors to give in small amounts - which is hard with most e-commerce providers because of fees on minimum donation requirements.

GivKwik turns donations into points, which you use to support your favorite causes and help businesses decide where to give. This means that anytime you see our GIV button next to online content, on nonprofit websites or on our own platform, you can just press the GIV button.

Givkwik helps donors make donations to the Givkwik Fund. Donations can be made via credit card and check. The Givkwik Fund is managed by ImpactAssets, a nonprofit financial services firm. All donations are tax-deductible.

They offer a catalog of nonprofit profiles. Givkwik campaigns let you and your friends vote for favorite nonprofits to win grants that are distributed from your donation. They tally all the votes and keep everyone notified of a campaign's progress, winners and promotions.

When a nonprofit organization wins a campaign grant, Givkik processes and electronically deliver the grants for the Fund.

You can write it off: 100 percent of donations are tax deductible, and 88.5 percent goes to the cause. The Givkwik Fund pays Givkwik a fee for services. ImpactAssets manages the Fund and assesses a fee for each transaction into the Fund. Together, they make sure that 88.5 percent of all funds donated are redistributed as grants.

Givkwik operates with a Donor Advised Fund, which are becoming more common. They provide the same operational value as a foundation without the administrative expense. Donor Advised Funds have typically been marketed to families and wealthy individuals. But Givkwik works with Donor Advised Funds to help them attract more donations from lower income consumers and companies.

As you can imagine, running a traditional foundation is expensive. So Givkwik democratizes the foundation model: Instead of a small group of wealthy donors, anyone can participate in our foundation with as little as $5. Instead of a selection committee, anyone can vote for worthy causes to receive grants in an open and transparent way. Instead of larger amounts of money that benefit only selected nonprofits, Givkwik disburses block grants of $100. Every donation is exchanged for an equivalent balance of points and each point works just like a vote. Each vote has financial value. Whenever a particular nonprofit gathers enough votes from consumers and businesses alike, they win a $100 grant. There is no limit to the number of grants a nonprofit can receive and since Givkwik leverages a nonprofit's existing profiles on other social networks like Facebook and Twitter, this means Givkwik can help nonprofits achieve supplemental income for doing what they're already doing: building online communities through shared story-telling.